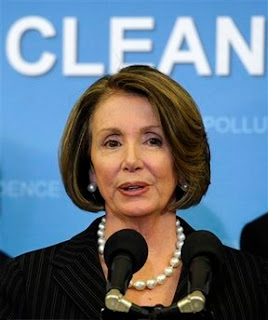 Three Californian surgeons were playing golf together and discussing surgeries they had performed. One of them said, "I'm the best surgeon in California. My favorite case, a concert pianist lost several fingers in an accident, I reattached them, and 8 months later he performed a private concert for the Queen of England."

The second surgeon said, "That's nothing. A young man lost an arm and both legs in an accident, I reattached them and two years later he won a gold medal in track and field events at the Olympics."

The third surgeon said, "You guys are amateurs. Several years ago a woman was high on cocaine and marijuana and she rode a horse head-on into a train traveling 80 miles an hour. All I had left to work with was the woman's hair and the horse's ass.
I was able to put them together and now she's
Speaker of the House."
Posted by Mike Colonna at 1:18 PM No comments:

Read My Lips...Cut the Budget! 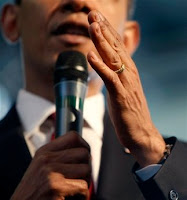 20 April 2009Editor,
U.S. News & World ReportDear Editor:
You report that President Obama today "challenged" his cabinet to "cut the budget by $100 million" ("Obama to Cabinet: Cut $100 Million from Budget," April 20). What courage. A President who proclaims the importance of making "hard choices" calls upon his government to trim away a whopping one thirty-six-thousandth of its projected expenditures for the year - or, alternatively reckoned, one twelve-thousandth of its projected budget deficit.To put this budget "cut" in perspective, suppose that the typical American family, earning $50,000 annually, plans this year to run a budget deficit proportionate to the deficit that Uncle Sam will run. Such a family would plan to spend $75,000. Now suppose that this family, seeking to signal its faux-commitment to financial prudence, promises spending cuts equal, in proportion to its budget, to the cuts announced today by Mr. Obama.
This family would declare - surely with much fanfare - that it will reduce its planned expenditures by $2.09! Perhaps it might promise to survive the year with one less gallon of gasoline or with one less cup of coffee.
Who would take such a gesture to be anything other than audaciously insulting sarcasm by the chronically irresponsible?

Truth or Dare...Terrorists Plan Next Move..... 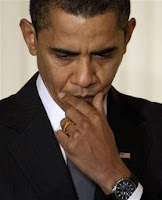 Just when I began to give credit to our esteemed leader for taking bold action with the Pirate/Hostage situation, I opened this email.
If you are interested in what really happened in the piracy hostage standoff this week, read the following from a friend with a lifetime in national security-related operations. I have erased the name of his personal SEAL contact as he is still on active duty and I would not want to risk career damage to him for his truthfulness.
FYI, ROE= rules of engagement, BHO=our esteemed president.
Here is the note a SEAL friend sent me (LCmdr XXXXXXXX)
================
Having spoken to some SEAL pals here in Virginia Beach yesterday and asking why this thing dragged out for 4 days, I got the following:1. BHO wouldn't authorize the SEAL teams to the scene for 36 hours, going against OSC (on scene commander) recommendation.
2. Once they arrived, BHO imposed restrictions that they couldn't do anything unless the hostage's life was in "imminent" danger.
3. The first time the hostage jumped, the SEALS had the raggies all sighted in, but could not fire due to ROE.
4. When the navy RIB came under fire as it approached with supplies, no fire was returned due to ROE. As the raggies were shooting at the RIB, they were exposed and the SEALS had them all dialed in.
5. BHO specifically denied two rescue plans developed by the Bainbridge CPN and SEAL teams
6. Bainbridge CPN and SEAL team CDR finally decide they have the OpArea and OSC authority to solely determine risk to hostage. 4 hours later, 3 dead raggies
7. BHO immediately claims credit for his "daring and decisive" behaviour. As usual with him, it's BS.So per our last e mail thread, I'm downgrading Obama's performace to D-. Only reason it's not an F is that the hostage survived.Read the following accurate account:Philips’ first leap into the Indian Ocean hadn’t worked out well. With the Bainbridge in range and a rescue by his country’s Navy possible, Philips threw him self off of his lifeboat prison, enabling Navy shooters onboard the destroyer a clear shot at his captors — but none was taken. Guidance from National Command Authority — president Barack Obama — had been clear: a peaceful solution was the only acceptable outcome to this standoff, unless the hostage’s life was in clear danger.The next day, a small Navy boat was fired on by the Somali pirates — and again no fire was returned. This was again due to the cautious stance assumed, thanks to a mandate from the commander in chief’s staff not to act until Obama, a man with no background dealing with such issues, decided that an outcome other than a “peaceful solution” would be acceptable.After taking fire from the Somali kidnappers again Saturday night, the on-scene-commander decided he’d had enough. Keeping his authority to act in the case of a clear danger to the hostage’s life and having heard nothing from Washington since yet another request to mount a rescue operation had been denied the day before, the Navy officer — unnamed in all media reports20to date — decided the AK47 leveled at Philips’ back was a threat to the hostage’s life and ordered the NSWC team to take their shots.Three rounds and all three brigands became enemy KIA and Philips was safe.There is an upside, a downside, and a spinside to the series of events over the last week=2 0.Almost immediately following word of the rescue, the Obama administration claimed victory and declared that the dramatic end to the standoff put paid to questions of the inexperienced president’s toughness and decisiveness.Despite the Obama administration’s attempt to spin yesterday’s success as a result of bold, decisive leadership by the president, the reality is nothing of the sort.
What should have lasted only hours — as long as it took the USS Bainbridge to steam to the location — became an embarrassing four day standoff between a ragtag handful of criminals with rifles and a U.S. Navy warship.
Posted by Mike Colonna at 9:32 AM No comments:

CNN Debates or Reports...You Be the Judge!

Why Men Are Never Depressed....!

Men Are Just Happier People--
What do you expect from such simple creatures?
Your last name stays put.
The garage is all yours.
Wedding plans take care of themselves.
Chocolate is just another snack.
You can be President.
You can never be pregnant.
You can wear a white T-shirt to a water park.
You can wear NO shirt to a water park.
Car mechanics tell you the truth.
The world is your urinal.
You never have to drive to another gas station restroom because this one is just too icky.
You don't have to stop and think of which way to turn a nut on a bolt.
Same work, more pay.
Wrinkles add character.
Wedding dress $5000. Tux rental-$100.
People never stare at your chest when you're talking to them. New shoes don't cut, blister, or mangle your feet.
One mood all the time.
Phone conversations are over in 30 seconds flat.
You know stuff about tanks.
A five-day vacation requires only one suitcase.
You can open all your own jars.
You get extra credit for the slightest act of thoughtfulness.
If someone forgets to invite you, he or she can still be your friend.
Your underwear is $8.95 for a three-pack. Three pairs of shoes are more than enough.
You almost never have strap problems in public.
You are unable to see wrinkles in your clothes.
Everything on your face stays its original color.
The same hairstyle lasts for years, maybe decades.
You only have to shave your face and neck.
You can play with toys all your life.
One wallet and one pair of shoes -- one color for all seasons.
You can wear shorts no matter how your legs look.
You can 'do' your nails with a pocket knife.
You have freedom of choice concerning growing a mustache.
You can do Christmas shopping for 25 relatives on December 24 in 25 minutes.
No wonder men are happier.
Posted by Mike Colonna at 3:00 PM No comments: 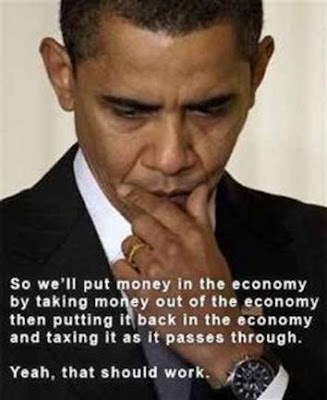 Posted by Mike Colonna at 4:16 PM No comments:

2 .It's always darkest before dawn. So if
you're going to steal your neighbor's newspaper,
that's the time to do it.

4.Always remember that you're unique.. Just
like everyone else.

5.Never test the depth of the water with both feet.

6.If you think nobody cares if you're alive,
try missing a couple of car payments.

8.If at first you don't succeed, skydiving is
probably not for you.

9. Give a man a fish and he will eat for a day. Teach
him how to fish, and he will sit in a boat and drink beer
all day.

10. If you lend someone $20 and never see that
person again, it was probably a wise investment.

11 If you tell the truth, you don't have
to remember anything.

12.Some days you're the bug; some days
you're the windshield.

13.Everyone seems normal until you get to know them.

14.The quickest way to double your money is to
fold it in half and put it back in your pocket.

15. A closed mouth gathers no foot.

16.There are two theories to arguing with women.
Neither one works.

17. Generally speaking, you aren't learning
much when your lips are moving.

18. Experience is something you don't get
until just after you need it.

19.Never miss a good chance to shut up.

20. Never, under any circumstances, take a sleeping
pill and a laxative on the same night.
Posted by Mike Colonna at 3:50 PM No comments:

Makes Sense To Me!

Posted by Mike Colonna at 4:01 PM No comments: