Unions will have "Hell to Pay!"

These garbage men really stink.
Selfish Sanitation Department bosses from the snow-slammed outer boroughs ordered their drivers to snarl the blizzard cleanup to protest budget cuts -- a disastrous move that turned streets into a minefield for emergency-services vehicles, The Post has learned.

Miles of roads stretching from as north as Whitestone, Queens, to the south shore of Staten Island still remained treacherously unplowed last night because of the shameless job action, several sources and a city lawmaker said, which was over a raft of demotions, attrition and budget cuts.


William FarringtonOH, BABY, IT’S SLUSH A MESS! Martina George and her grandkids get mired in slush yesterday in Chelsea.
Halloran said he met with three plow workers from the Sanitation Department -- and two Department of Transportation supervisors who were on loan -- at his office after he was flooded with irate calls from constituents.
The snitches "didn't want to be identified because they were afraid of retaliation," Halloran said. "They were told [by supervisors] to take off routes [and] not do the plowing of some of the major arteries in a timely manner. They were told to make the mayor pay for the layoffs, the reductions in rank for the supervisors, shrinking the rolls of the rank-and-file."
New York's Strongest used a variety of tactics to drag out the plowing process -- and pad overtime checks -- which included keeping plows slightly higher than the roadways and skipping over streets along their routes, the sources said.
The snow-removal snitches said they were told to keep their plows off most streets and to wait for orders before attacking the accumulating piles of snow.
They said crews normally would have been more aggressive in com bating a fierce, fast-moving bliz zard like the one that barreled in on Sunday and blew out the next morning.
The workers said the work slowdown was the result of growing hostility between the mayor and the workers responsible for clearing the snow.
In the last two years, the agency's workforce has been slashed by 400 trash haulers and supervisors -- down from 6,300 -- because of the city's budget crisis. And, effective tomorrow, 100 department supervisors are to be demoted and their salaries slashed as an added cost-saving move.
Posted by Mike Colonna at 8:09 AM No comments:

Posted by Mike Colonna at 11:56 AM No comments:

DEAR ABBY
My husband has a long record of money problems.
He runs up huge credit-card bills and at the end of the month, if I try to pay them off, he shouts at me, saying I am stealing his money.
He says pay the minimum and let our kids worry about the rest, but already we can hardly keep up with the interest.
Also he has been so arrogant and abusive toward our neighbors that most of them no longer speak to us.
The few that do are an odd bunch, to whom he has been giving a lot of expensive gifts, running up our bills even more.

Also, he has gotten religious.
One week he hangs out with Catholics and the next with people who say the Pope is the Anti-Christ, and the next he's with Muslums.

Finally, the last straw.
He's demanding that before anyone can be in the same room with him, they must sign a loyalty oath.
It's just so horribly creepy!
Can you help?

Stop whining, Michelle.
You can divorce the jerk any time you want.
The rest of us are stuck with him for two more years!
Posted by Mike Colonna at 10:45 AM No comments: 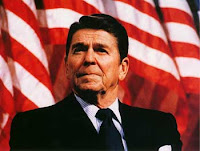 At a time when our president and other politicians tend to apologize for our country's prior actions, here's a refresher on how some of our former patriots handled negative comments about our country. These are good JFK'S Secretary of State, Dean Rusk, was in France in the early 60's when DeGaulle decided to pull out of NATO. DeGaulle said he wanted all US military out of France as soon as possible. Rusk responded, "Does that include those who are buried here?" DeGaulle did not respond. You could have heard a pin drop. When in England , at a fairly large conference, Colin Powell was asked by the Archbishop of Canterbury if our plans for Iraq were just an example of 'empire building' by George Bush. He answered by saying, "Over the years, the United States has sent many of its fine young men and women into great peril to fight for freedom beyond our borders. The only amount of land we have ever asked for in return is enough to bury those that did not return." You could have heard a pin drop.

There was a conference in France where a number of international engineers were taking part, including French and American. During a break, one of the French engineers came back into the room saying, "Have you heard the latest dumb stunt Bush has done? He has sent an aircraft carrier to Indonesia to help the tsunami victims. What does he intend to do, bomb them?" A Boeing engineer stood up and replied quietly: "Our carriers have three hospitals on board that can treat several hundred people; they are nuclear powered and can supply emergency electrical power to shore facilities; they have three cafeterias with the capacity to feed 3,000 people three meals a day, they can produce several thousand gallons of fresh water from sea water each day, and they carry half a dozen helicopters for use in transporting victims and injured to and from their flight deck. We have eleven such ships; how many does France have?" You could have heard a pin drop.

A U.S. Navy Admiral was attending a naval conference that included Admirals from the U.S., English, Canadian, Australian and French Navies. At a cocktail reception, he found himself standing with a large group of officers that included personnel from most of those countries. Everyone was chatting away in English as they sipped their drinks but a French admiral suddenly complained that, whereas Europeans learn many languages, Americans learn only English. He then asked, "Why is it that we always have to speak English in these conferences rather than speaking French?" Without hesitating, the American Admiral replied, "Maybe it's because the Brit's, Canadians, Aussie's and Americans arranged it so you wouldn't have to speak German." You could have heard a pin drop.

AND THIS STORY FITS RIGHT IN WITH THE ABOVE... Robert Whiting, an elderly gentleman of 83, arrived in Paris by plane. At French Customs, he took a few minutes to locate his passport in his carry on. "You have been to France before, monsieur?" the customs officer asked sarcastically. Mr. Whiting admitted that he had been to France previously. "Then you should know enough to have your passport ready." The American said, "The last time I was here, I didn't have to show it." "Impossible.. Americans always have to show their passports on arrival in France !" The American senior gave the Frenchman a long hard look. Then he quietly explained, ''Well, when I came ashore at Omaha Beach on D-Day in 1944 to help liberate this country, I couldn't find a single Frenchmen to show a passport to."You could have heard a pin drop.
Posted by Mike Colonna at 7:08 AM No comments: