Ted Kennedy is no friend of Bruce... 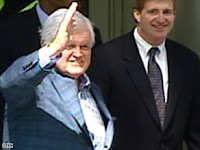 Picture from CNN on the Net
Good reading and good to remember. I'm sorry that a human being is sick...even Teddy. But this guy has skated through a lifetime of transgressions and failures that would put anyone without his name and inherited money in the slams many times over. I hung out in Boston some going to school and I can report that you are in great danger there if you say much about Teddy and the Kennedy's that isn't laudatory. In a book store there I found a large picture of Teddy just inside the door with a sign that said, "THE SENATOR!" which was selling his book even though the book was an old one and pretty much out of print.

The "lest we forget" title of the attached is of interest because every November in Boston on election day they play an Irish pub song on the radio entitled, "We'll Remember in November when we VOTE!" They don't mean for Republicans.


...lest we forget. The Last of The Kennedy Dynasty As soon as cancer was found, I noticed the immediate attempt at canonization of old Teddy by the main stream media .. telling us what a "great American" he is. I say, let's get a couple things clear & not twist the facts to change the real history .. he was caught cheating at Harvard ... while attending, he was expelled twice, once for cheating on a test, and once for paying a classmate to cheat for him... While expelled, Kennedy enlisted in the Army, but mistakenly signed up for four years instead of two.. great .. the man can't count to four .. His father, Joseph P. Kennedy, former U.S. Ambassador to England, pulled the necessary strings to have his enlistment shortened to two years, and to ensure that he served in Europe, not Korea, where a war was raging... no preferential treatment for him like he charged President Bush received ... Kennedy was assigned to Paris, never advanced beyond the rank of Private, and returned to Harvard upon being discharged... imagine a person of his "education" NEVER advancing past the rank of Private .... While attending law school at the University of Virginia , he was cited for reckless driving four times, including once when he was clocked driving 90 miles per hour in a residential neighbourhood with his headlights off after dark. Yet his Virginia driver's license was never revoked. He passed the bar exam in 1959 ..... amazing !! In 1964, he was seriously injured in a plane crash, and hospitalized for several months. Test results done by the hospital at the time he was admitted had shown he was DUI .. the results of those test remained a "state secret" until in the 1980's when the report was unsealed .... On 19 July 1969, Kennedy attended a party on Chappaquiddick Island in Massachusetts . At about 11:00 PM, he borrowed his chauffeur's keys to his Oldsmobile limousine, and offered to give a ride home to Mary Jo Kopechne, a campaign worker. Leaving the island via an unlit bridge with no guard rail, Kennedy steered the car off the bridge, flipped, and into Poucha Pond. He swam to shore and walked back to the party -- passing several houses and a fire station -- and two friends returned with him to the scene of the accident. According to their later testimony, they told him what he already knew, that he was required by law to immediately report the accident to the authorities. Instead Kennedy made his way to his hotel, called his lawyer, and went to sleep. Kennedy called the police the next morning. By then the wreck had already been discovered. Before dying, Kopechne had scratched at the upholstered floor above her head in the upside-down car. The Kennedy family began "calling in favours", ensuring that any inquiry would be contained. Her corpse was whisked out-of-state to her family, before an autopsy could be conducted. Further details are uncertain, but after the accident Kennedy says he repeatedly dove under the water trying to rescue Kopechne, and he didn't call police because he was in a state of shock.. It is widely assumed Kennedy was drunk, and he held off calling police in hopes that his family could fix the problem overnight. Since the accident, Kennedy's "political enemies" have referred to him as the distinguished Senator from Chappaquiddick... He pled guilty to leaving the scene of an accident, and was given a SUSPENDED SENTENCE OF TWO MONTHS. Kopechne's family received a small payout from the Kennedy's insurance policy, and never sued. There was later an effort to have her body exhumed and autopsied, but her family successfully fought against this in court, and Kennedy's family paid their attorney's bills... a "token of friendship" ? Kennedy has held his Senate seat for more than forty years, but considering his longevity, his accomplishments seem scant. He authored or argued for legislation that ensured a variety of civil rights, increased the minimum wage in 1981, made access to health care easier for the indigent, and funded Meals on Wheels for fixed- income seniors and is widely held as the "standard-bearer for liberalism". In his very first Senate roll, he was the floor manager for the bill that turned U.S. immigration policy upside down and opened the floodgate for immigrants from third world countries. Since that time, he has been the prime instigator and author of every expansion of and increase in immigration, up to and including the latest attempt to grant amnesty to illegal aliens. Let's not allow the spin doctors make this jerk a hero -- how quickly the American public forgets what the real legacy is --
http://en.wikipedia.org/wiki/Chappaquiddick_incident
Posted by Mike Colonna at 11:06 AM No comments:

The Rev. Steps In It!

Rev. Jessie Jackson does not like the idea that he's taken second fiddle to Barrack Obama. You have to admit, Jackson has the "Midas Touch" everything he touches turns to mufflers!
Posted by Mike Colonna at 2:58 PM No comments: