- Racism is How this Country was Founded
- Chickens Come Home to Roost
- We’re the Same as Al-Qaeda
- We bombed Nagasaki & Didn’t bat an eye
- God’s Sick of this Sh*t!
Posted by Mike Colonna at 8:05 AM No comments:

SUPERHEAD SAYS SHE'S DONE WITH BILL MAHER:
Karrine Steffans hints at possible verbal abuse.
*Karrine "Superhead" Steffans says she is free and clear of her on-and-off again boyfriend Bill Maher, who hosts his own political-themed roundtable show on HBO. The video vixen-turned-best-selling author has aired out all of the TV host's dirty laundry to various members of the media, including EUR's Lee Bailey and next month's issue of Vibe magazine.
Posted by Mike Colonna at 8:11 AM No comments:

Bill Maher Clown of The Week

Bill Maher, true to form on his "Real Time" program on HBO on Friday, went on a tirade against Pope Benedict XVI and the Catholic Church, only days before the Pope’s visit to the U.S.. He stated that the Pope "used to be a Nazi" and compared him to a cult leader. He then went on to call the Church a "child-abusing religious cult" and "the Bear Stearns of organized pedophilia." "And that’s the Church’s attitude: 'We’re here, we’re queer, get used to it,' which is fine, far be it from me to criticize religion."
Posted by Mike Colonna at 8:01 AM No comments:

As an employee, Olbermann was his own kind of Worst Person in the World. His sense of superiority and caustic vibe eventually cost him gigs and friends at three networks. How naughty was he? Olbermann was the only former ESPN star not invited back for the sports network’s 25th anniversary (he’s allowed to participate on Patrick’s radio show only because Patrick promised that Olbermann would never set foot on the network’s Bristol, Connecticut, campus). He was fired from his first stint at MSNBC after he denounced his own show in a commencement address at his alma mater. Fox hired him to host its major-league baseball Game of the Week and then sent him home with a year left on his contract simply for being a malcontent.
Posted by Mike Colonna at 8:48 AM No comments: 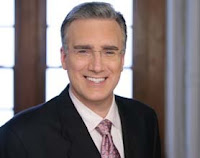 KEITH GETS LOW RATINGS IN BEDOctober 9, 2006 -- A BROWN-haired beauty who claims she had an unsatisfying one-night stand with Keith Olbermann is getting her sweet revenge - she's launched a blog to warn other women about the acerbic MSNBC commentator's boorish bedroom habits.

The bitter babe, who calls herself KarmaBites1, says she doesn't want others "to fall into the same trap . . . and I want him to feel some remorse for what he's done . . . He sets his mind on a woman, lures her in, and once he gets what he wants, he refuses to ever speak to them again. And I don't think he understands the damage he's caused."

A 30-something office worker of Caribbean descent, KarmaBites1 said she struck up an e-mail friendship with Olbermann, whom she admired, and agreed to fly to New York to meet him last May. She says he came to her hotel room and opened a bottle of Merlot which he "spilled all over." Then, when "sexual activity began [in] less than an hour," Olbermann had difficulty. "I pretended he knew what he was doing," the embittered blogger writes. "I adored the guy. I didn't want him to think he was a dud in bed," so she faked experiencing ecstasy.

Next, he piled on excuses as to why he had to leave. "He told me he's an insomniac and that it's hard for him not to sleep in his own bed. He also mentioned he hadn't had 'company' in a while. [He said] he had an early meeting with the Yankees [and] he might be allergic to the pillows in the hotel bed."

Six days later, she claims, Olbermann e-mailed her to tell her never to contact him again. "I practically begged him to explain what I did wrong. I told him I deserved some kind of explanation for such a dismissal, but I never heard from him again." She said she's since heard from six other women who say they had brief sexual relationships with Olbermann.

She named her blog forthisreliefmuchthanks.blogspot.com, after a line from "Hamlet" she says the perennial bachelor quoted.

Olbermann's spokeswoman said she'd get back to us, but didn't.
Posted by Mike Colonna at 2:53 PM No comments: